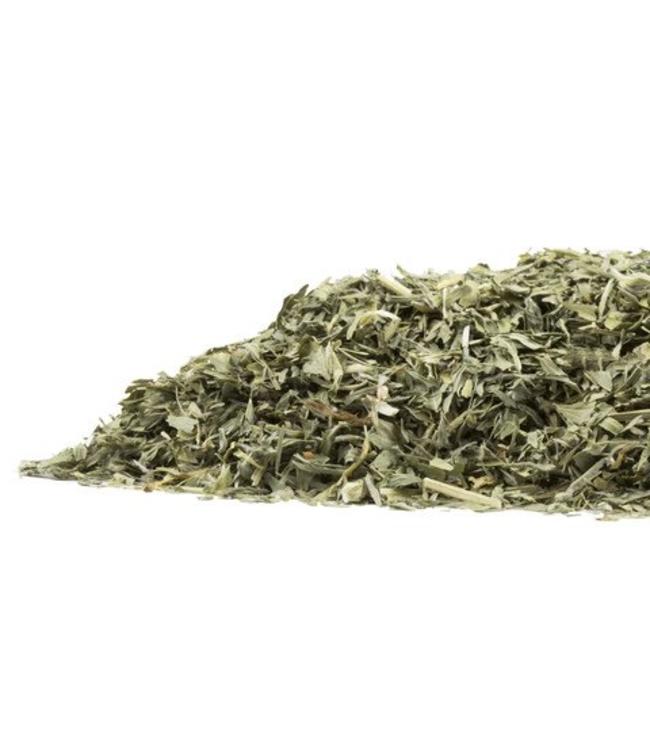 Well known as a feed plant for livestock, alfalfa has a rich tradition of other uses. In traditional American folk medicine, it has been administered as a nutritive tonic. The dried alfalfa leaf is widely available in herbal shops and health food stores as an herbal tea, tablet, or powder. The seed is often sprouted and eaten in salads and sandwiches.

Alfalfa is a long-lived perennial in the Fabaceae family with leguminous flowers which vary in color from purple to yellow, trifoliate clover-like leaves, and a deep tap root. Some sources say that taproots have been found reaching down 68 feet into the soil! Alfalfa is native to southwest Asia with wild species occurring in the Caucasus, and in mountainous regions of Afghanistan and Iran, and is very widely cultivated throughout the world.

The US is the leading producer of alfalfa, and within the country.

Alfalfa was first grown in the United States by early colonists, but it was not widely cultivated across the country until the California Gold Rush. Alfalfa provides a nutrient dense hay and is considered the foremost forage plant for dairy cows. It is fed to chickens and rabbits and utilized in gardening and large scale agriculture. It is a "nitrogen fixer" like many legumes. Alfalfa not only provides healthy nutrients for humans, but it helps to "heal" soil as well and makes an effective "green manure" for providing nutrients to poor soil.

Alfalfa was used in traditional Chinese medicine (TCM), making its first appearance around 200 CE during the Han Dynasty, for digestive system support and to stimulate the appetite. Alfalfa was revered for its soothing and strengthening properties. It became available around the 1850's to the Native Americans who adopted it into their healing system and referred to it as 'Buffalo grass'. They would grind up the seed into flour and put in gruels and bread and also ate the young leaves and shoots. In India, alfalfa seeds have been applied topically as a cooling poultice. The leaves are a source for the dietary supplement chlorophyll, and the seeds are used to make a yellow dye. In parts of China and Russia young alfalfa leaves have been served as a vegetable.

The tastes are sweet, bitter, and earthy. It is energetically cooling.

The dried leaf or powder can be used in teas, made into capsules or herbal tablets, or infused as an herbal tincture.