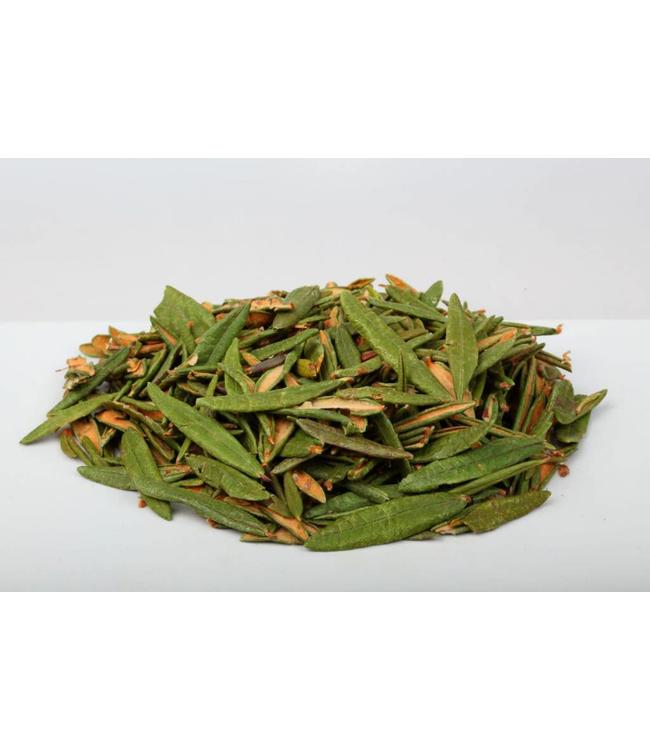 Description---This evergreen shrub grows to a height of 4 to 5 feet, with irregular, woolly branches. The leaves are alternate, entire, elliptical or oblong, 1 to 2 inches long, the upper side smooth and woolly underneath, with the edges rolled back. The large, white, five-petalled flowers grow in flattened terminal clusters, opening in June and July. The plant grows in cold bogs and mountain woods. It is taller, more regularly formed, and has larger leaves than L. palustre. During the American War of Independence the leaves were much used instead of tea-leaves. They should be collected before flowering time, and the tops when the flowers begin to open.

Bees are much attracted by the flowers, but animals do not browse on the plants, which are said to be slightly poisonous.

Strewed among clothes, the leaves will keep away moths, and in Lapland the branches are placed among grain to keep away mice.

In Russia the leaves are used for tanning leather.

Constituents---There has been found in the leaves tannin, gallic acid, a bitter substance, wax, resin, and salts.

Medicinal Action and Uses---The leaves are tonic, diaphoretic, and pectoral, having a pleasant odour and rather spicy taste. They yield their virtues to hot water or to alcohol. It is useful in coughs, dyspepsia, and irritation of the membranes of the chest. An infusion has been used to soothe irritation in infectious, feverish eruptions, in dysentery, leprosy, itch, etc. The strong decoction, as a wash, will kill lice. The leaves are also used in malignant and inflamed sore throat.

Dosage---Of infusion, 2 to 4 fluid ounces, three to four times a day. Overdoses may cause violent headache and symptoms of in toxication.